That’s my first observation.  Bangkok is huge — about 8.3 million people.  I’m very glad that I’m traveling with someone who is much more navigationally inclined than myself.

Tory woke up before me today and went on a walking adventure, but I slept off 36 hours of wide-awake travel for a bit.  After breakfast we headed out to Wat Pho, about a 10-minute walk from the hostel.  Wat Pho is one of the larger and grander temple complexes in Bangkok.  It holds over 1,000 Buddha statues, with a few more significant ones.  Most significant is the massive reclining Buddha — just lying down, and he looks too big for the structure he’s held in.  The complex also has an elementary school, complete with an irritable, ruler-to-table-slapping older teacher, and a medical and massage training grounds. 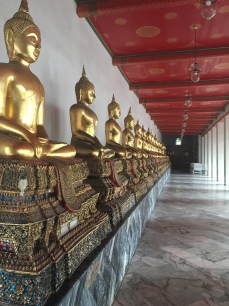 We strolled for a bit, walking around the massive Grand Palace complex, which indeed looks grand from the outside, but also a little too expensive at the gates.  We found our first pad thai and green curry not far from there.  First food.

Food is definitely a primary objective of this trip.  The vinegar on the right is tongue-meltingly spicy, with little tiny chiles that burn your face right off.

We went back to the hostel to figure out next steps for a bit, then walked in vain to try to find Wat Tramit to find the largest golden Buddha in Bangkok.  As directionally-proficient as Tory is, these thanon and sois are not laid out in a grid, and we didn’t make it in time — that’s probaly OK; apparently temple burn-out is an actual thing.  We did meander various alleys and markets for a couple hours, though, right through the local Chinatown.

We found a quiet local establishment a mile or two away right on a canal.  We watched giant lizard-crocodiles fight each other for fish in garbage water.  We met a couple — she Swiss and he Turkish — and headed down to Khao San road together.  Khao San is the backpacker haven — really loud, and very neon, but with all of the watered-down sights you need in one place.  The street vendors charge you to take pictures of their wares — street-food cockroaches and spiders.  We declined, but settled on some other questionable street sustenance outside the reggae bar.  We had some sort of minced pork in a deliciously tamarind-y broth and a chicken leg chopped to bits in the same with handfuls of basil and long green chiles that taste like a mix of a green bean with a cucumber.

Tomorrow, to the floating market!