We made it back into Chiang Mai via motorbike again.  Being the biking experts we now are, we didn’t encounter any problems (or, maybe more significantly, any police).  We took the train back into Bangkok late and slept for a few hours at a downtown hostel and then went our separate ways — Tory back to the USA, me on to Vietnam.

I flew right into Hanoi, and the differences between Thailand and Vietnam (or maybe at least more directly, between Bangkok and Hanoi) were immediately clear.  People in Thailand seem to be more reserved; the kids in Hanoi’s airport climbed all over my backpack playing with the straps.  The horn on your car or bike in Bangkok is reserved for dire emergencies.  The horn in Hanoi is used for any or all reasons.  People generally follow traffic laws in Bangkok.  Need to be on the other side of the road in Hanoi?  Then make seven lanes from two going whatever direction you see fit.  The traffic in Hanoi is insane, traffic signals are ignored, the right-of-way goes to the bigger or fastest, and pedestrians are best to just start walking into the middle of the road, and don’t change your pace, because the bikes will veer.  Whatever you do, don’t stop or walk backwards.

Hanoi is completely in your face.  Where haggling is pretty commonplace across the region, at least in Thailand it seemed that it wouldn’t start until you showed interest.  In Hanoi you are constantly being approached to buy!  Buy now!  And immediately!  There is a lot more yelling and LOUD NOISES in Hanoi, and I’ve had to keep a more careful hand on my wallet.

Overwhelming as it is at first, I started to really like Hanoi.  On Saturday I caught the Hanoi Hilton, famous prison run by the French, then later used to house American POWs (I have some thoughts on how fascinating I found the… verbage… through the prison museum, but I think I’ll wait until I’m out of the country).  Afterwards I did a couple laps around Hoàn Hoàn Kiếm Lake, then collapsed in a heap of heat exhaustion (the heat index hit 113° F Saturday and yesterday).  On Sunday I visited Ho Chi Minh’s mausoleum (lucky Uncle Ho gets some serious air conditioning) which is apparently what everyone in Hanoi does on Sundays.

Hanoi highlight was definitely my street food tour.  Super inexpensive way to get into little street stalls that I would have never braved alone.  Highlight was the dried beef papaya salad — pictures below!  Click on ’em to make ’em bigger. 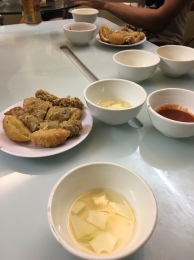 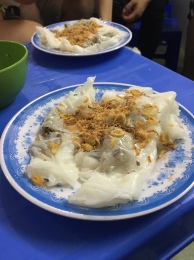 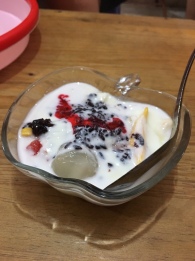 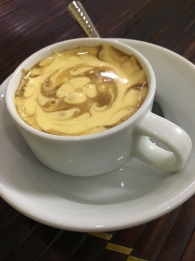 Today I took an early train into Sapa, but more on that once I do some more discovering.  I rented a motorbike to get myself into a homestay about 10 kms out of town.  I am in the middle of an unspeakably beautiful valley.  I also initially thought that I had a really quiet motorbike, but apparently it’s one that just dies halfway through every time I go downhill.  Biking the ridge tomorrow — let’s see how it does uphill.